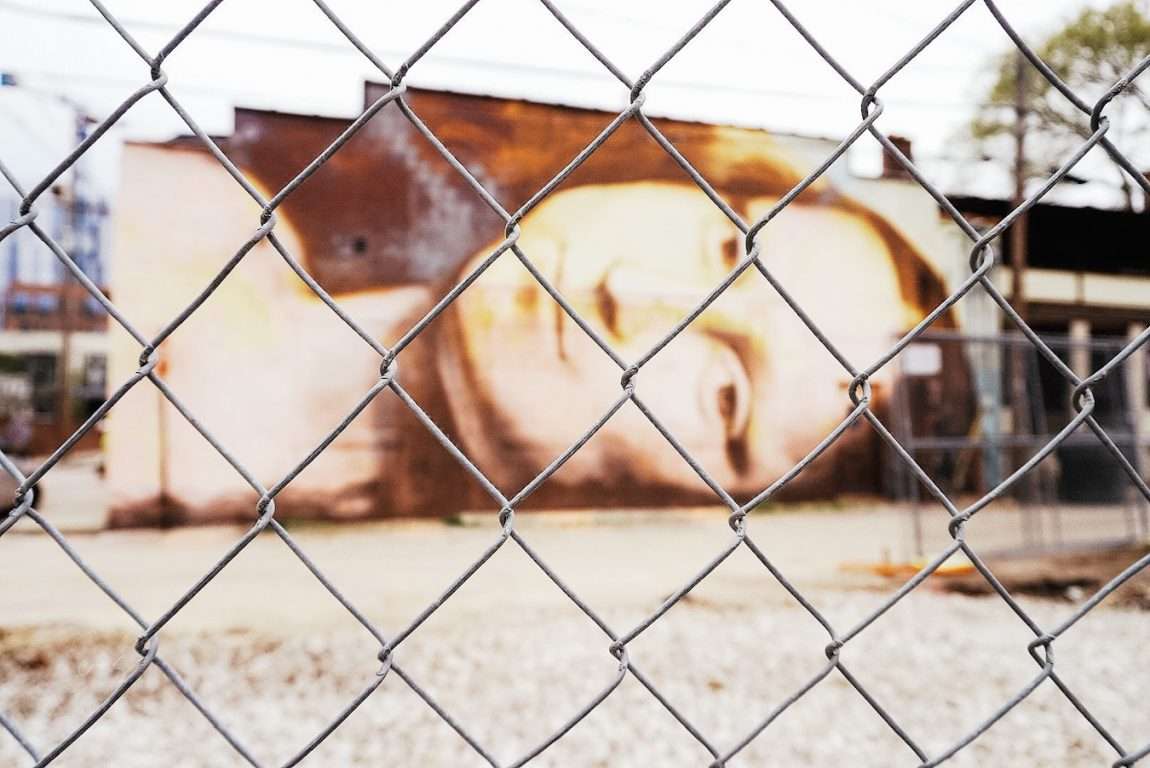 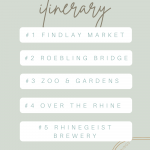 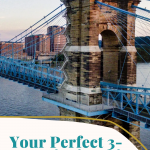 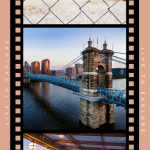 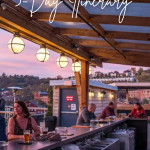 The birthplace of Steven Speilberg, spicy cinnamon style chili, and America’s oldest baseball team – this historic city was founded in 1788. Dubbed ‘Queen City’, Cincinnati makes a perfect romantic weekend getaway. Our itinerary will guide you through a full 72 hours of fun, relaxation, and memory-making events around town! Think of walking through the second oldest zoo in the United States, seeing the first professional American baseball team, and grabbing snacks at a foodie’s dream market? We’ll have you feeling like a local in no time!

WHAT WE LOOK FOR IN OUR WEEKEND GETAWAYS: good food, art or scenery, a little space to stretch our legs, and ample opportunity for relaxation. Since it’s hard to accomplish those things in 2 days with driving, three-day trips are our favorite. (Especially if we’re planning more spontaneously!) When we plan our weekend escapes from Louisville, we typically make it a three-day weekend by taking off a Friday or a Monday. This is your full breakdown of how to spend an affordable & romantic weekend in Cincinnati!

DID YOU KNOW?
Cincinnati isn’t this Ohio city’s original name. When it was founded in 1788, its original name was Losantville. This Nordic/German name roughly translates to ‘The town opposite the mouth of the Licking’. The city sits at the intersection of two rivers – the major Ohio River and the minor Licking River.

How To Get To Cincinnatti

When we’re planning quick weekend getaways, we typically try to stay within six hours of our home city. (If you’re looking for quick day trips from Louisville, see our post here for 12 awesome destinations!) The great thing about Cincinnati is that it’s centrally located in Ohio. You can be there within 6 hours from a ton of major cities including Chicago, Louisville, St.Louis, and Pittsburgh!

If you’re looking for a little background noise to your drive, listen to one of our favorite travel podcasts or find our latest playlists here!

Day 1: Getting into Cincinnati & Catching A Reds Game

Whether you’re coming from Pittsburg, Louisville, Chicago, or St.Louis – don’t miss out on your first day in Cinci. Grab a hotdog at Senate for lunch, then head to the riverfront for a few hours of exploring. See the old-timey steam riverboats, walk along the Roebling Bridge, and visit the National Underground Railroad Freedom Center. {All of which will take you about 2-2.5 hours.} After you’ve explored a little, don’t miss kicking off your weekend with a Cincinnati Reds game! (Most games start around 7 PM giving you plenty of time to see a little of the city beforehand.

Once you’ve cheered your heart out and sufficiently indulged in ice-cold beer, it’s time to explore! Head out on the town to sample a few of the best local breweries!! Local staples like Madtree Brewing and the Braxton Brewing Company perfectly accompany a casual night after a ballgame.

P.S. I, Shelbs, know very little about baseball and I still have fun cheering for the wrong things at all times! Baseball games are fun for the atmosphere even if you don’t love the team!

If You’re Not Into Sports

Even if you aren’t looking to go to a baseball game – head downtown. You can still kick off your weekend with gourmet duck-fat-fries and hotdogs at Senate! After enjoying a mouth-watering treat, head to the riverfront to explore a few more riverfront gems. There are a few more spots along the river you need to see, along with all of the other pre-game activities!

Along with the aforementioned Roebling Bridge, watching the Cincinnati riverboats, and the National Underground Freedom Center – enjoy the Skystar Ferris Wheel and the vintage waterfront carousel! (Not only are they romantic, but they’re also Instagram-friendly!!)

FOODIE TIP: Looking for a late-night delicious pizza? Try Larosa’s Pizzeria! Open until midnight, they’ve been serving Cincy since 1954. Larosa’s is the perfect ‘after a few adult beverages’ by-the-slice kind of deliciousness!

You’ll want to be up early to get the best of the best donuts from the famous Holtman’s Donuts!! Holtman’s is a part of the 16 bakeries on the Bulter County Donut Trail. They’ve been in business since 1960 and now have five locations around Cincinnati. This family-owned operation is committed to creating an authentic donut experience! Their donuts are still made by hand along with fresh-from-scratch batches of icing every day. Donuts are the best way to start your vacation adventures!

After you’ve grabbed your morning fixes – walk off that sugar buzz by exploring a few of Cincinnati’s best museums. There are many incredible museums in Cincinnati, but you can’t do them all on a weekend trip. You’ll want to try to stick to one or two! Our picks would be in the iconic Cincinnati Museum Center.

Housed in the historic Union Terminal, this grouping of museums is a one of a kind experience. Union Terminal is one of the most well-preserved examples of 1930’s Art Deco architecture in the US. We highly recommend taking a romantic stroll under the jaw-dropping 180-foot domed glass rotunda while considering the romantic history of World War II soldiers returning home from war.

We can just imagine the fairy-tale reunions of these soldiers returning home to their wives and families back when Union terminal was actually a train station. Definitely a romantic stop to add to your weekend itinerary in Cincinnati!

When you’re heading to the museums – there are two perfect for an adult weekend getaway:

– Cincinnati History Museum: Known for the largest S-scale train model in the country and a lifesize steamboat replica of Cincinnati’s early industrialization period!

Lunch at Findley Market – One of the most iconic places in Cinci is the Fendley Market. Located in the trendy ‘Over The Rhine’ district, Findley Market is a foodie haven. With gourmet sandwich shops, specialty spices, it’s an amazing sensory experience. Perfect for strolling through and working up an appetite after you’ve been amazed by the dinosaurs!

After exploring Findley Market, continue exploring the booming Over The Rhine neighborhood. (You can walk this entire neighborhood in an hour or two. Maybe you’ll even find the Mona Lisa Mural at the beginning of this post!)

‘OTR’, as it’s known by the locals, is a gorgeously revitalized neighborhood in the heart of Cincinnati. Beyond the trendy shops and eateries, Oer The Rhine has a special draw. What makes it so notable is the largest USA collection of preserved 19th century German and Italianate architectural buildings. Over The Rhine is stunning to stroll through on a romantic weekend getaway. You’ll see German throwback microbreweries, the famous Findlay Market, and gourmet eateries all within walking distance. A few key stops:

Once you’re done exploring the market and Over The Rhine – head back to your hotel and get ready for a relaxing date night! Enjoy a nice dinner, catch late-night live music at Fountain Square, and enjoy a few upscale lounges to complete your evening!

Beyond your typical brewery or pub, Cincinnati has a few extra date-night-worthy spots. These are the kinds of places where cocktail dresses and slacks are required while enjoying a craft cocktail!!

Read Next:  The Best Pizza in Louisville, Kentucky Ranked

As always on the last day of our trips, we try to make sure we’re well-rested and then head to brunch somewhere delicious. In Cincinnati, our pick would be the boozy Belgian brunch available all day at Taste of Belgium. Indulging in crepes, fresh banana Nutella waffles, along with just about any Belgian beer you could want? It’s a fun take on your typical brunch experience! There are 6 locations around Cincinnati including the famous Findlay Market – but they’re always packed!!

– Sleepy Bee Cafe: Another great brunch place, but this time, one you should feel good about indulging in! The owners of Sleepy Bee cafe are committed to not only sourcing their menu from local farms – but also in supporting the planet’s agricultural future. The simplest way to do that? Invest in the bees! It doesn’t hurt that their rotating seasonal menu includes delectable meals like the delicious Blue Ash Smash breakfast sandwich. Scrambled eggs topped with candied bacon, their signature nectar sauce, and chimichurri? Wipe the drool from your chin and head in to grab a bite!

After you’ve sufficiently stuffed yourself at brunch – head to the Cincinnati Zoo & Botanical Garden! Normally we don’t suggest zoos because they’re kind of all the same and better when you have the infectious excitement from kids in your group. However, this is the 2nd oldest zoo in the US!

Opening in 1875, this zoo has expanded into a massive garden with tulip blooms in the spring and a pollinator garden to support the bees. They’re open at 10 AM making it a perfect after brunch walk through this Cincinnati landmark.

On the last leg of our weekend getaways to Cincinatti, we always try to stop in to REI and IKEA. We know.. they just scream romance right..? But seriously, sometimes there is nothing like capping off a trip with a nice pair of hiking boots or a visit to the container store! We don’t have them in Louisville so it’s officially a treat for us to get to go!

After grabbing all of your hiking and home necessities, head to Aladdin’s Eatery for lunch. You have to try the Farmer’s Pita drizzled in garlic sauce and hot sauce. In the words of Ev ‘ their homemade hot sauce is out of control!’ Mediterranean food is our favorite cuisine, so we’re really picky on recommendations. This place is a must!!

Before you leave for you’re trip, you’ll want to book your hotel. We do it on the fly every now and then but for weekend getaways, it’s best just to not stress before hitting the road. If you’ve got tickets to see a Cincinnati reds game – The Best Western Premier Mariemont Inn is close to the stadium. For sweeping panoramic city views, try 21C Museum Hotel Cincinnati!

To easily find budget accomodations for your three day escape – use the Booking.com widget below.

The Best Time To Visit Cincinnati

Being North of the Ohio Valley, but still close enough to the mountains in the eastern US gives Cincinnati true seasons. Cold winters and sticky hot summers, but really pretty spring and fall seasons. The best time to visit Cincinnati will allow you to take full advantage of getting to walk the city, experience sunsets on rooftop bars, and enjoy the parks! We recommend heading into town April through May and September through October.

If you’re looking for a winter destination – Cincinnati would also be great for brewery hopping, seeing an indoor concert at the Washington Music Hall, or strolling through the museums!

The Ultimate Guide To Transportation in Italy

How to Spend 24 Hours In Las Vegas

Your Ultimate Guide to the Trendy ‘NULU’ Louisville Neighborhood

Your Full Guide to Keeneland: A Perfect Day At The Races